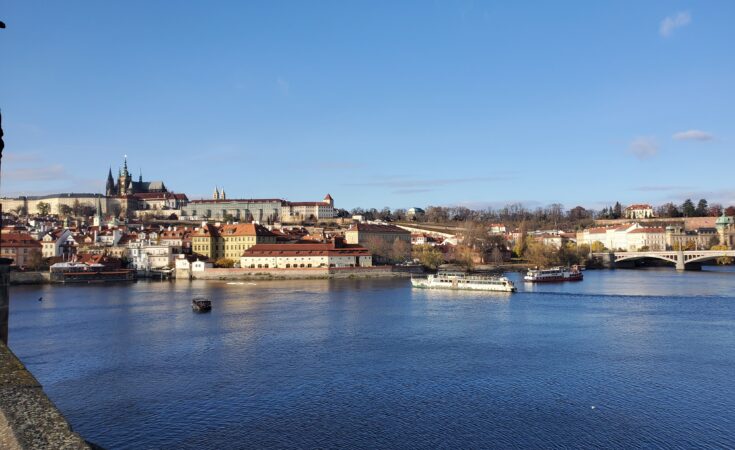 After the high of two overseas trips to Amsterdam and Naples within the space of a week, came the low of coming home and sliding into dark, chilly and dull November. With a few airmiles left to my partner’s name, we thought we would attempt to perk ourselves up by booking another city break – this time a wintery weekend in Prague, Czech Republic.

This time, we actually had slightly over 48 hours, arriving late in the evening and leaving first thing in the morning after three nights, which gave us two whole days to explore the Czech capital.

Before we booked our winter city break in Prague, I really had no pre-existing knowledge the area at all, except that it came highly recommended and I should expect it to be really cold. Oh, and there is a sex museum, which if you’ve read my previous travel write ups seems to be something that eludes me as I always turn up when they’re closed.

Did we make it to the Prague Sex Machine Museum? You’ll have to read on to find out.

(That’s about as cliff-hangery as I can muster, sorry).

After an evening flight spent making the most of the free booze in business class, we arrived at Václav Havel Airport in Prague where we looked at the various complicated public transport options and instead decided to pick up a taxi (you can Uber it for about £20) to our temporary digs, the centrally located Majestic Plaza Hotel. It cost us about £150 for three nights’ stay, and it was clean and fairly quiet and the bed was big and comfy, so no complaints here.

Rather than just go to bed which would arguably have been the sensible option, I decided that we should go out and explore, and walk off my sore back that although on the mend, had not enjoyed the flight.

My first impressions of Prague by night were that it is so much cleaner and quieter, and the traffic decidedly less terrifying than our previous stay in Naples – the two places, although both really enjoyable, could not be more different.

I spotted a roof bar which looked exciting to slightly tipsy me, and we headed in not quite appreciating that it was actually a club, and full of Young People in their finest outfits whereas we were in our travelling comfies and definitely not dressed for the occasion. No matter, cocktails help fix that kind of worry.

We went to bed late, and drunk, and slept through a fair amount of the next morning.

By day, Prague is absolutely beautiful.

The streets are the cleanest I’ve ever seen – there is very little in the way of graffiti and everything looks well kept and cared for; there were even workers sweeping up fallen leaves.

The grand and imposing architecture is stunning and it is entirely possible to waste a day just wandering round, gawping at all the huge and ornately decorated buildings. I don’t know what I was expecting from the former communist state but the wealth on display including the gold leaf on many of the Czech capital’s buildings is something else.

I think it’s probably worthy of a mention that although it used to have a bit of a seedy ‘stag do’ reputation, there really wasn’t any sign of this kind of thing; I did not see a single person urinating or vomiting in the street the whole time I was there (we didn’t stay for Saturday night though!).

While in Prague, you have to visit the Charles Bridge overlooking the Vlatava river. It is one of the main tourist destinations and like, totally instagrammable. You need to find the plaque with the dog and give it a rub. I’m not sure why, but I did just in case.

The walk up to the Castle complex (which contains the Old Royal Palace, St. George‘s Basilica, Golden Lane, and St. Vitus Cathedral) is long and steep but totally worth it when you get to the top and can get pretty pictures.

Alternatively, there is a tram you can get which takes you up there.

We wandered around the complex and into the cathedral, but decided against paying the 250 CZK entrance fee, instead spending our cash on a glass of locally produced wine in a little vineyard which we found just at the exit.

One thing you must do when you’re in Prague is visit the astronomical clock attached to the Old Town Hall in the Old Town Square; not to glory in its splendour but to grab a glass of mulled wine or beer and sit down, watch the crowds build and then admire the disappointment on their faces when a clock built in 1410 doesn’t do much more than have a few moving figures. It’s very pretty though!

We also stopped by Kafka’s head. Here I have to admit I am not particularly familiar with his work, nor do I know why Prague has honoured him with a rotating statue of his head (and I’m not about to look it up to make myself look intelligent), but it made for a fun selfie.

I’m sure you’ve been waiting with bated breath to find out whether I made it to the Sex Machines Museum, and the answer was a resounding yes.

Situated in the old town, it cost just under a tenner (250 Czech Koruna) each to enter the museum which is spread out over three floors. It’s not huge (that’s what she said, fnar fnar) but it was an hour or so of fun and/or feeling slightly uncomfortable.

A lot of the machines felt a bit surplus to requirement and big on effort. If you have to pedal a machine yourself I’m not entirely sure how much enjoyment you can derive from it, maybe it’s just me…?

I’m not saying I’ve been on the internet too long but it takes a lot to shock me, however the various anti-masturbatory devices did make me wince.

The scariest things however were the lifesized plush sex dolls. I’m not one to kink shame but if you ever meet a man who has one of these, run far away and call the police and never, ever go to the cinema to watch The Muppets with him. I’m sorry I neglected to get a picture; I was obviously in shock.

Anyway, don’t expect to get too titillated, that’s my advice.

We also visited the Museum of Medieval Torture, as we happened to be walking past. Situated next to Madame Tussauds and the Chocolate Museum (which had a waxwork Jason Statham in a very shiny suit advertising its wares; I didn’t know he was a big fan of chocolate but there you go) I’d like to imagine that the waxworks probably started life as various Czech celebrities before being saved from the bins round the back and shackled in stocks and other painful looking devices.

Interestingly or not there seemed to be a lot of overlap with the Sex Machines Museum, although I’m not judging. You do you.

… And that was it, I’m afraid. I’m sure there are lots of great museums in which to emerge yourself in Czech culture (see a list here), but we decided to spend the rest of our time sampling local beers and food. We were tempted by the Communism Museum, but you had to pay for it which doesn’t seem in the spirit of things…

Food and drink in Prague

Although you can get any type of cuisine, it being a huge capital city, it is of course bad and wrong to go for a Maccy Ds when you could be enjoying traditional food such as garlic soup and goulash. We found a restaurant off of the Old Town Square which did both and a glass of beer for under ten quid and it was money well spent.

Honestly, you’ll not be hungry again for days but it’s warming and delicious and if you’re with other people and they all have the same excessive amount of garlic, it’s OK. You certainly won’t have to worry about vampires for a while.

Street vendors are everywhere selling trdlo (which is, apparently, Hungarian and not Czech at all); pastries rolled in cinnamon and then filled with fruit, ice cream, chocolate, cream or whatever you fancy really. They’re tasty AF and it would be rude not to try one while you’re out there.

Price wise, it depends where you go and what you have.

Beer is cheap; not as cheap as it used to be, back in the day, but you can get a pint for under £2. Glasses of hot wine (mulled wine) are a few quid each. We found ourselves in a traditional Czech pub for dinner one evening; we got a huge burger and a steak both with beer and it worked out about tenner a piece. In the main town square, things are obviously more expensive.

While the Czech wine wasn’t terrible, I thought I’d take the opportunity to sample some of Prague’s best cocktail bars.

The Alchemist is a small upstairs bar with just nine signature cocktails to choose from (although they will mix you whatever you fancy!); the decor is amazing and although it’s dark at night and has limited seating, it is well worth a visit if you like a bit of theatre with your cocktail.

Black Angels is another cocktail bar; this one is downstairs in a hotel basement and when we went there was live music and friendly service. There are loads of cocktails to choose from but I can’t share the menu with you because you aren’t allowed to take pictures inside. Although here is one of me… Ahem.

Finally, L’Fleur cocktail and champagne bar also does food including charcuterie and cheese plates which is exactly what I fancied after a big stodgy lunch.

None of these places were particularly cheap (probably on a par with the UK), but they were all special with a lovely welcoming atmosphere, friendly staff and of course – amazing cocktails.

So – would I visit Prague again?

Absolutely, in a heartbeat! It is the perfect place for a European winter city break especially as a couple travelling without children.

The flight time from the UK isn’t too long, the airport is a reasonably short journey to and from the town, it isn’t expensive and didn’t appear overly touristy and there is so much more to see that I would love to return at some point.

Things of note: There are around 30 CZK to £1, which can be confusing when you’re used to Euros, but everywhere we went took card so I didn’t need to get cash out and could keep an eye on my spending.

It is definitely worth remembering that it can get very chilly – so take your hat and scarf – but the mulled wine and festive feel will help!

Whatever you’re into – whether it’s history, nature, river cruises, food, drink or just wandering, there is plenty to keep you busy in Prague.